Back in this city again after 2 years, things are slightly changed. Quick catch up with my friends and paint a quick piece before heading back to the airport to continue my long journey to Bogotá. 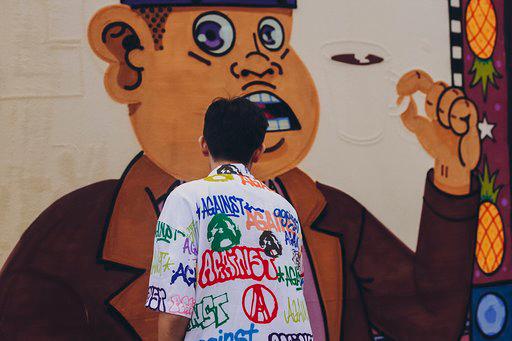 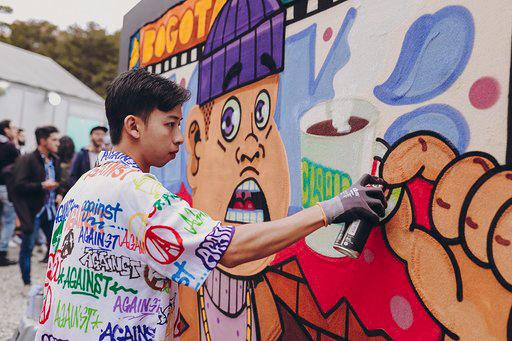 "The people, the culture... there's so much magic in Colombia, so I feel like being a kid, being able to have that, being able to also call Colombia my home, it was such an important part of my introduction as an artist, too, because it's such a big part of my life as a human being." - Spray Paint on 3m x 2m rug

Hand painted rugs by the artists from RUDA FEST 2019.

"We have a sense that we should be like the mythical cowboy... able to take on and conquer anything and live in the world without worrying too much."

"It’s havoc at the Cloak Hotel! The pigeons are at it with their cheeky business and there’s a notorious rat trying to bribe the rat cop with a brick of cheese. Poor lobby boy! He’s only trying to do his job." -

Guatavita is a municipality and town of Colombia in the Guavio Province of the department of Cundinamarca. Guatavita is located 75 km northeast of the capital Bogotá. Main economical activities in Guatavita are agriculture, mining and tourism. In terms of agriculture most common are potatoes, maize, barley and peas. Tourism is mainly in the weekends when craft markets open in town.

Medellín is the capital of Colombia’s mountainous Antioquia province. Nicknamed the “City of Eternal Spring” for its temperate weather, it hosts a famous annual Flower Festival. Modern metrocables link the city to surrounding barrios and offer views of the Aburrá Valley below. Sculptures by Fernando Botero decorate downtown's Botero Plaza, while the Museo de Antioquia displays more of the Colombian artist’s work.

STORY TIME : This is when Ledania, Goma and Amby left to Boston for some works. I travelled to Medellín with Lauren - my partner in crime for the rest of the tour in Colombia. As soon as we arrived Medellín airport, we look lost and thank god we were found by Plaga and David. They took us to some ride to mountain and view the city's landscape. During the evening, we head to Comuna 13, this neighborhood is filled with a lot of street arts from different artists and we decided to make a quick piece for the town.

Did a little throw-ups at Casa Ram in exchange for some discount during the stays.

Guatapé is a town and municipality in Antioquia Department, Colombia. It is a part of the subregion of Eastern Antioquia. Guatapé is located in the outskirts of Medellín, bordering a reservoir created by the Colombian government for a hydro-electric dam, built in the late 1960s. This quaint town is the gathering place for "Las Vegas", or the small farms of the area. It is also a growing area of recreation for citizens of Medellín, and aims to be a tourist destination for foreign travellers. Each building has tiles along the facade's lower walls in bright colors and dimensioned images. Many of the tiles are tied to the products sold by the shops, or the beliefs of the residents. Others are cultural images of the farming heritage of the community.

The Rock of Guatapé, also known as the Stone of El Peñol is a landmark inselberg in Colombia. It is located in the town and municipality of Guatapé, Antioquia.

Santiago de Cali, or Cali, is the capital of the Valle del Cauca department, and the most populous city in southwest Colombia. Cali is the second-largest city in the country by area and the third most populous. As the only major Colombian city with access to the Pacific Coast, Cali is the main urban and economic centre in the south of the country, and has one of Colombia's fastest-growing economies.

"Life is an affair of mystery; shared with companions of music, dance and poetry."

"ACAB - All Colors Are Beautiful."

Back again to this city for a 4-days layover, catch up with my friends and paint something chill.

Back in town again. It's been a while since the last time I dropped by this city for spraycation.

Afternoon exercise and BBQ session with the boys FOUR & GORO.

Did a small project with Pilot Pen UK at Global Street Art HQ.

Samsung - Life in the City Today